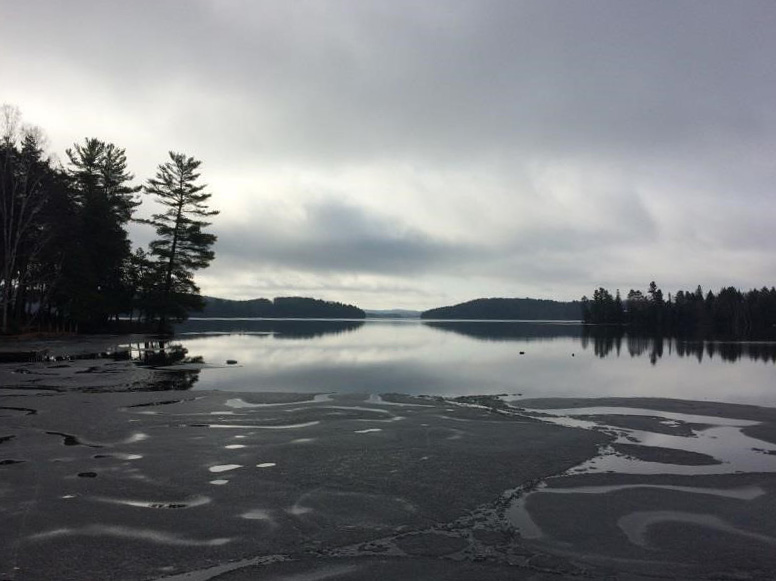 On behalf of the PLRA Board, we extend our warmest welcome and wish you all an enjoyable and pleasant summer at Percy Lake with friends and family.

As you are no doubt aware, the weather this winter and the onset of spring, along with recent storms have been erratic and unpredictable. The photo of our bay shows ice still on the lake in early May– although the ice was gone the next day. As noted in the Haliburton Echo, the “ice out date” on Haliburton’s Head Lake on May 5 this year, broke the record set in 1956 by one day.

Last year, we witnessed record high water levels in many lakes and rivers, resulting in flooding in many communities, Minden for example. This year, spring levels were lower than 2016/2017, due to less precipitation in March. We offer no predictions for this summer, but in light of climate uncertainty and other factors, it is best to be cautious and take heed of stormy weather. Included in this Update (p.6) is a graph indicating estimated water levels and precipitation for the year 2018.

Current Matters – Updates
Lake Trout Assessment – In August 2017, the Ministry of Natural Resources and Forestry (MNRF) conducted a low-mortality Lake Trout population assessment. This topic is of great interest, not only for anglers but for all of us who value the health of the Lake. Adam Chalice of the MNRF was the lead of this study and the author of the article on the assessment for the Update.

During all phases of work, the portage trail will be open for public use. Some of the wood resulting from this work was donated to ‘Haliburton Fuel for Warmth’ program located at Abbey Gardens.

PLRA Membership
The annual PLRA membership fee is a modest $30 per family. These fees pay our major expenses, including membership in organizations including Coalition of Haliburton Property Owners’ Association (CHA), the Federation of Ontario Cottagers’ Associations (FOCA), and the Coalition for Equitable Water Flow (CEWF) and for expenses incurred by PLRA’s annual obligations and events. We encourage you to renew or if not a member, to join the PLRA. The membership form is included for your convenience.

PLRA Board
Our current Board members are as follows:

Jack Russel, who has been Past-President and served as Director of the Board for many years, has recently resigned. Jack is active in many endeavors in the Haliburton region, and will continue to contribute to the Haliburton community in diverse ways. We extend our best wishes to Jack and know that his interest in the well-being of Percy Lake will no doubt continue.

Have a great time this summer, and I look forward to meeting you at our AGM and at the Pot-Luck event and of course, on the lake or thereabouts.

Percy Lake – Lake Trout Assessment – Summer 2017
Percy Lake was identified as a candidate for the introduction of the Kingscote ‘Silver’ lake trout by the Ministry of Natural Resources and Forestry (MNRF) in the early 2000’s due to its proximity to Kingscote Lake in Algonquin Park (about 10 km), the relatively simple fish community, available habitat and similar basin characteristics. This introduction was done to provide an additional self-sustaining population of the ‘Silver’ strain of lake trout as it was endemic to Kingscote Lake and there were concerns about the long-term sustainability of the Kingscote population. Stocking of the Kingscote Silvers occurred in Percy Lake between 2002 and 2013.

This past summer, MNRF, Bancroft District conducted a low-mortality Lake Trout population assessment using benthic gillnets set for 2-hour durations to assess the survivorship of the stocked Silvers and also to get a sense on whether natural reproduction of Silvers had begun. Catch rates were very good, with the vast majority of fish captured appearing to be stocked Silver strain lake trout with fin clips, a few unclipped Silver lake trout, and a few Manitou strain lake trout which had naturalized in Percy Lake following historical stockings between 1964 and 1996. Genetic confirmation of the lineage, as well as the age of each lake trout captured, is yet to be confirmed, however, survivorship of the stocked fish appears to be strong. Habitat quality including dissolved oxygen for lake trout was very good at the time of the survey in late August 2017.

Lake trout in the Haliburton area are typically small-bodied and have slow growth rates. Percy Lake is no exception. To give a sense of the slow growth rates of Silvers in Percy, a mature female Silver that was caught had a left pectoral clip with a fork length of 374mm. We know that this fish was stocked in the Spring of 2010 as a yearling (over 1 year old) as that was the only year with a left pectoral clip that was stocked into Percy. That means this fish was 8.5 years old at 374mm (14.72 inches) when caught in late August 2017. Recognizing the slow growth and maturity rates of Percy Lake’s Silver lake trout and the low number of unclipped Silvers, it is still early days to see any natural reproduction of Silvers in Percy Lake. This highlights the vulnerability of lake trout and our collective responsibility to conserve them.

Dedicated lake trout anglers are encouraged to complete angler diaries of the fishing efforts on Percy Lake or any Haliburton trout lakes. As indicated on the diary form (refer to link below), public input is crucial to the development of sound District fisheries programs.
Adam Challice, adam.challice@ontario.ca
Management Biologist in the Minden Field Office, Bancroft District MNRF