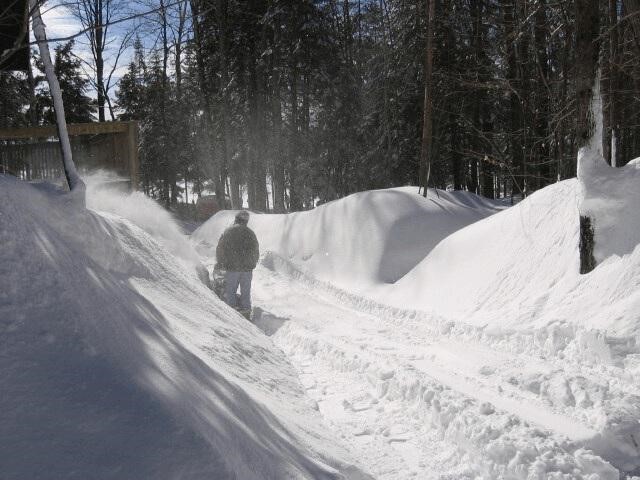 Well, it’s hard to believe that another has flown by.

Without a doubt, the most memorable part of the past winter was the amount of snow we got. I’ve only been coming to Haliburton since 1970, but this has got to be the most snow I’ve seen in that time – definitely, the most we’ve seen since Wendy and I moved here in 2002. I can’t even imagine what it would have been like if we hadn’t had the three major rainstorms we had that melted most of the snow that was on the ground at the time. Doreen Douglas measures the snow at their place each time before they shovel and her records say that we had 17 feet, 2 ½ inches of snow this year! It’s been a relatively active year too. Between the Percy Lake Watershed Plan and the meetings regarding the waterfront development project, there is no doubt that Dysart Council knows a lot more about Percy Lake than they used to. Percy Lake was also well represented at the public hearings before the Panel on the Future of the Trent-Severn Waterway.

Now, another summer season is approaching. I hope that you and your loved ones have the opportunity to enjoy our little piece of paradise here on Percy Lake just a few more days than you did last year. Stay safe and enjoy.
Ken Loney

Why you should be a member of the PLRA

In the course of trying to convince various Percy Lake property owners to join the PLRA, the typical question we’re asked is “Why should I bother ?”. Well, there are two parts to the answer. First, when we appeared before Township Council regarding the waterfront storage shed issue, we were able to state that we represented 76% of the property owners. Council was impressed by the relatively high percentage of participation, but 100% would have been even more impressive. Second, most of the property owners around Percy Lake are seasonal residents but several members of the PLRA executive are permanent residents and have the time (and inclination) to attend weekday Council meetings to represent those who can’t be there for the meetings.

Come on folks – it’s only $20 per year for membership and the only way we’re going to be able to protect our little corner of paradise is by presenting a united front.

These are the issues with which we’ve been involved

We attended the Dysart Planning Committee meeting on January 7th, 2008 to do a bit of a presentation of our Watershed Plan. It went quite well. A few of the Councillors had actually read the document. There was quite a bit of discussion about the Waterfront Development project and the associated issues of roads, bridges, the portage, the sand spit beach, and the islands. We also discussed the “recommendation” regarding the sheds and Council was reminded that they had previously agreed to the terms. We received correspondence from Pat Martin (Municipal Planner) advising that our Plan has been “accepted” by Council and will be forwarded along to the County for incorporation into the Official Plan once FOCA releases their report on streamlining the process of including all these lake plans into the official plans.

The waterfront land development is progressing. We’ve met with Paul Wilson (Grief’s project manager) a couple of times this winter. While the formal submission of their Plan for Subdivision is still a ways off, the picture is becoming a little more clear.

Paul Wilson appeared before township council in February to get input from council regarding the 20 km road network that will be built for the development. Council’s position is that the roads should probably be owned and maintained by a “condominium corporation” which would be funded by the property owners on each segment of road. This would allow the township to put more funds into the improvement of the existing township road and bridges that will be affected by the land development.

Later in February, the PLRA and the HLCA met with Paul to discuss the latest version of the development map and the items on our collective wish lists. There are still 106 proposed lots (65 on Percy Lake and 41 on Haliburton Lake) but most of them are bigger because they go back to the new roads which have been moved back further from the waterfront. The lots average 6.5 acres and 610 feet of frontage. Paul Wilson has revamped the proposed lots around the Gull River portage and it’s likely that there is an 11-acre parcel along the north bank of the river that will be deeded over the township for public use. The sand beach issue might get resolved by the developer conveying those two blocks of land to the Municipality who would then ask the Associations to maintain and monitor them. The wetland in the southeast of Percy Lake might get conveyed to either the Municipality or Ducks Unlimited in order to get them designated as a “Provincially Significant Wetland”. They have already zoned EP (environmentally protected) so a building permit can never be issued.

Paul Wilson’s best guesstimate is that Plans for Subdivision will be submitted late in 2008. Approval of those plans and servicing of the new lots will take most of 2009, so the earliest the first (10 or so) lots will come up for sale would be 2010. The developer still hasn’t decided which lots would go first – but logically the ones in the south end of Haliburton Lake would be the least expensive to develop.

In recent months, Bell Canada announced that high-speed Internet will be offered to residents around the south end of Haliburton Lake. Bell offered the explanation that the offer was restricted, by the capabilities of the equipment, to residences that were within 5 kilometers of Internet equipment installation, which takes it up to about the area around the Haliburton Lake boat launch and the FIRA Hall. Since the announcement, we’ve been working with representatives of the HLCA and FIRA to try to convince Bell Canada that there is enough interest around the north end of Haliburton Lake and up on Percy Lake to justify the required capital investment in equipment to extend the offer. We encourage you to fill out and return the attached survey indicating your interest in signing up for Bell’s High-Speed Internet offering.

The AGM will take place on Sunday, June 29th, 2008 at 10:00 am at the FIRA Hall (5821 Haliburton Lake Rd). We are going to invite Murray Fearrey – Reeve of Dysart et al and Warden of Haliburton County, and Dan Kay – our local ward councilor.

The executive of the Percy Lake Ratepayers’ Association meets every long weekend from May to October for a couple of hours to monitor and organize the various activities in which we’re involved. We would like to extend an open invitation to any member-in-good-standing to attend a meeting, or if you have an issue you would like the executive to address, just contact one of the members of the executive for the time and location.

Fish Contest (16 years and under)

The PLRA fishing contest is open for the entire 2007 fishing season for lake trout and bass. Your entry may be reported to any Director of the association. If you prefer to catch and release, have a witness with you when you land that big one. The following rules apply:

It’s boating time again! Whether it be motorboats, canoes, sailboats, or personal watercraft, we must practice some sensible, courteous boating. Let’s try to remember (and tell your visitors) to observe some safe, thoughtful practices while boating. For example: