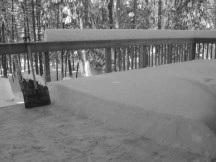 As I started into preparing this newsletter, it dawned on me how fast the past year has flown by ! But what a great year it’s been!

The Association has completed a number of good things … the summer weather was pretty good (unless you like sailing like I do) … the fall was lovely with all the vibrant colours … and although winter started with a vengeance with several monster snow falls, I’m guessing the total came out pretty close to average.

I don’t imagine the snowmobilers were real happy with the winter. We had a few January rainstorms that really took their toll on the trails and pretty much made the lakes impassable.

But, it’s been a good spring.It was fabulous for those of us who make maple syrup. We got almost twice as much as any other year so far.Most of the local commercial producers had to stop production prematurely on Easter weekend because they either ran out of firewood or jugs to pour syrup into!

The ice went off the lake four days earlier than last year and the black flies arrived right on time! Now hopefully, Dragon Fly Day won’t be late! (Maybe you didn’t know that, around here, dragon flies hatch within a day or so of June 8th almost every year – and then proceed to chow down on those awful black flies).

And now another summer season is approaching. We’re all fortunate to be able to spend time in this paradise we know as Percy Lake, but let’s all help to preserve it. Stay safe and enjoy.
Ken Loney

Why you should be a member of the PLRA

In the course of trying to convince various Percy Lake property owners to join the PLRA, the typical question we’re asked is “Why should I bother ?”. Well, there are two parts to the answer. First, when we appeared before Township Council regarding the waterfront storage shed issue, we were able to state that we represented 76% of the property owners. Council was impressed by the relatively high percentage of participation, but 100% would have been even more impressive. Second, most of the property owners around Percy Lake are seasonal residents but several members of the PLRA executive are permanent residents and have the time (and inclination) to attend weekday Council meetings to represent those who can’t be there for the meetings.

Come on folks – it’s only $20 per year for membership and the only way we’re going to be able to protect our little corner of paradise is by presenting a united front.

These are the issues with which we’ve been involved

Over the past year, the PLRA has been involved with a number of issues. We’ve represented the Percy Lake property owners at Township Council to reach a resolution on the waterfront storage shed issue. We’ve been working with Grief Brothers’ developer of the waterfront property to ensure continued access to the Gull River portage and the sand spit beach. We’ve represented the property owners at Township Council during the review of the Percy Lake Watershed Plan. We’ve worked with the Haliburton Lake Cottagers’ Association and the Fort Irwin Residents’ Association to convince Bell Aliant to bring high-speed Internet access to Percy Lake. And we’ve convinced Township Council that resurfacing of Haliburton Lake Road, Percy Lake Road and Johnson Bay Road cannot wait until after the waterfront development is complete.

Our lake plan has been accepted by Township Council and is sitting in a pile along with many others waiting for the Federation of Ontario Cottagers’ Associations (FOCA) to complete their report on how these lake plans should be handled at the municipal level. It is our understanding that the next stage is for the Township to submit the lake plans to the County for incorporation into the Official Plan of Haliburton County.

There have been a few developments over the winter.

Last fall, the developer (Paul Wilson) and the Ontario Ministry of Natural Resources and the Ontario Ministry of the Environment conducted extensive water sampling tests on Percy Lake. They had several meetings to compare the results of their independent tests in order to resolve any differences so that the report that is included with the Plans for Subdivision is acceptable to all parties.

Earlier this month, there was a meeting at Township Council to discuss the development. The meeting primarily focused on the new roads that will be built. Council has directed the developer to include “common element condominium” roads in the Plan. As a result, owners of the new lots will share the costs of maintenance of the (estimated) 16 kilometres of new roads that are going in, and the Township will be able to avoid the costs of the staff and equipment that would be necessary to perform that maintenance.

At the same meeting, it was noted that the sand beach on the east shore of Haliburton Lake and the sand spit beach on the east side of Percy Lake will be deeded over to the Township. In turn, the Township will post the beaches appropriately (water access only, no motorized vehicles, no overnight camping, etc) and ask the lake associations to “monitor” them (ie: keep them clean and call the by-laws officer and/or the OPP regarding any infractions).

Paul Wilson advised Council that he expects to submit the Plans for Subdivision by the end of June 2009. It will probably take until next building season to get all the required approvals before they can start to service the first of the new lots.

Good news! High-speed Internet is coming to Percy Lake. Thanks to the commendable efforts of Jack Russel, Dave Taylor, Jim Richert, and Gordon Cochrane (down on the north end of Haliburton Lake), Bell Aliant has been convinced to put high-speed Internet access into the north end of Haliburton Lake and Percy Lake. It was a lot of work, but these guys gathered together all those surveys we asked you for last year (even though it took a lot of chasing around) and used them to convince Bell Aliant that they had potential customers just waiting to sign up. Accordingly, Bell Aliant moved the project to the top of the priority list and committed to using the government assistance money to install the required equipment. Bell Aliant was quoted in the local Haliburton Echo as saying that necessary equipment would be installed in the late spring / early summer and the project should be finished by October 2009.

The executive of the Percy Lake Ratepayers’ Association meets every long weekend from May to October for a couple of hours to monitor and organize the various activities in which we’re involved. We would like to extend an open invitation to any member-in-good-standing to attend a meeting, or if you have an issue you would like the executive to address, just contact one of the members of the executive for the time and location.

Fish Contest (16 years and under)

The PLRA fishing contest is open for the entire fishing season for lake trout and bass. Your entry may be reported to any Director of the association. If you prefer to catch and release, have a witness with you when you land that big one. The following rules apply:

It’s boating time again! Whether it be motorboats, canoes, sailboats, or personal watercraft, we must practice some sensible, courteous boating. Let’s try to remember (and tell your visitors) to observe some safe, thoughtful practices while boating. For example: